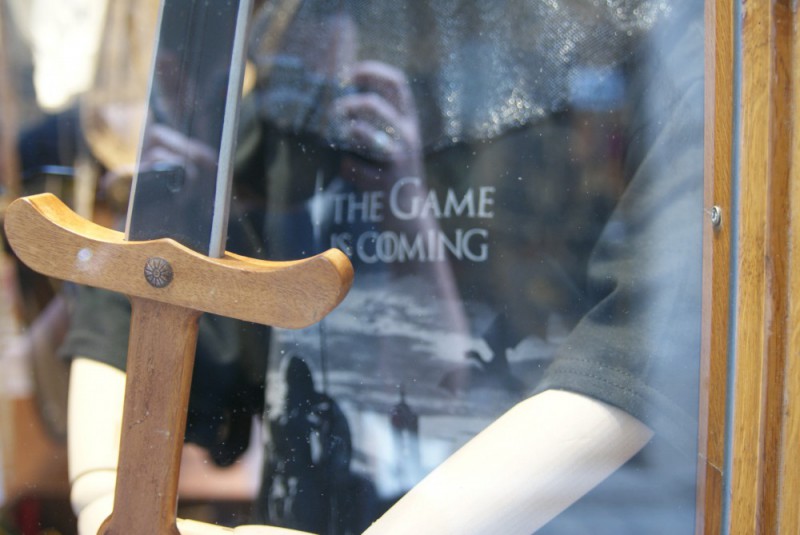 There are just those moments when you are wondering around clueless and than you stumble upon something very special… Right in the middle of the medieval town of Girona in the Northern Catalonia we ran into a group of religious fanatics from one very particular fantasy world, all prepped and costumed. The warriors of the SEVEN, the protectors of the Faith and a new-born “moral police” of Westeros. Yes, indeed, these guys are the notorious Sparrows from HBO’s “Games of Thrones”. Imagine us, two big fans of both George Martin’s books and the show, who were just rejected at the entrance to the marvelous Girona Cathedral (closed to visitors for some mysterious reason), standing around in the scorching Spanish sun, when a lightning stroke: THEY ARE FILMING GAME OF THRONES HERE!!! Our first clue was a guy in a GoT Tshirt with a walkie-talkie on his belt right outside of the Cathedral. And then the “staging area” doors opened and all you could hear was moderate cheering from also clueless present, who suddenly realized their luck, and the tireless clicking of the journalists’ cameras, who were already there, apparently under cover /who would wonder about five guys with cameras in the middle of the tourist season in Girona???/. I grabbed my camera and clicked away together with the paparazzi :). And here are the results – had to act fast, the outing of the Sparrows was a very short one!
P.S. Thanks to Watchers on the Wall, Games of Thrones Portugal and Games of Thrones Brazil for sharing my pictures!
Season 6 of the HBO’s Game of Thrones – Witnessed in Girona, Spain:

2 thoughts on “The GAME is coming to… Girona”